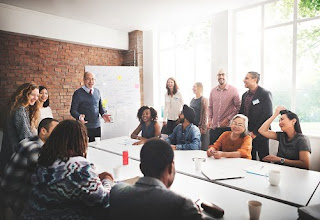 Even business professionals with the best of intentions often make the mistake of assuming that solid leadership is about one thing and one thing only: delegating responsibility. You've worked hard your whole life and you've ascended through the ranks - now is the time when people should start listening to what you have to say, right?

Yes, but not in the way you think.

In truth, employees shouldn't be doing what you say just because you're the one saying it. They should be following your guidance because they want to, they're inspired to, and if given the opportunity, they'd be steering that proverbial ship in the same direction that you've chosen. To get there, though, you're going to have to do more than just bark orders. You're going to have to inspire. Here are a few key things to keep in mind when trying to inspire others.

Leaders Who Inspire Support Their Employees in More Ways Than One

One of the most common traits among leaders who inspire their workforce is that they tend to support their employees, both personally and professionally. After all, everyone wants to have meaning in their lives and wants to be encouraged to follow their passions.

To help support this, you need to create an environment where learning is encouraged and where everyone feels like you have your own personal interest in their success. You need to be a leader that fosters development - someone who looks for and utilizes every opportunity for a person to take a positive step forward. Doing this won't just inspire pride in one's work, it'll go a long way towards inspiring loyalty, too.

Another essential trait that you'll need to focus on to both inspire those around you and to become the true leader you were meant to be is to lead by example. This goes far beyond just "treat others how you want to be treated." You need to show that you're willing to do what you want others to do, too. Never ask someone to do something that you would never be willing to do yourself. Don't be afraid to get in there and get your hands dirty, so to speak. If you want your team to put in long hours and work hard on that next big project, you have to put your money where your mouth is and show that you're ready and willing to do the same.

Inspirational Leaders Value Trust Above All Else

A truly inspirational leader knows that human beings are exactly that - human. The road to success isn't going to be an easy one and if you aren't willing to trust the employees around you, they will soon recede into their comfort zone. They'll quickly start to feel like the risk of stepping outside that box isn't worth it and that the environment they're spending so much time in just doesn't support them in doing so anyway.

By trusting your employees (and being willing to accept that not every challenge is a simple one to overcome), you're creating a situation where people are more willing to take on challenges and risk any failures that come their way. You need to show people that even if something goes wrong, you believe in them and that you have their back. You need to make them believe that even when they have a setback, you'll still be by their side, urging them to move forward. Rest assured, at that point, they will.