Sharing the Challenge Means Sharing the Victory: The Two-Way Street of Team Leadership 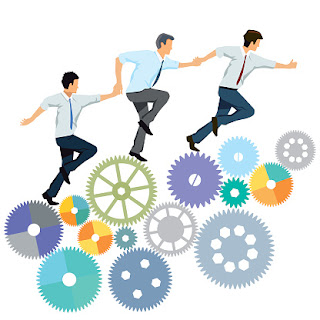 Many people work their entire lives to achieve a leadership role within an organization. They've put in their time, tirelessly working their way up through the ranks and then, it finally happens: they're trusted enough to be given the responsibility of bringing a team together for the benefit of a business's long-term goals. And yet, unfortunately, far too many people tend to veer off course with this almost immediately by assuming that respect is a given (which we've talked in detail about before), and by looking at "the team" as one thing and the "team leader" as something separate. They're not separate, and they never were. The sooner this is understood, the sooner you'll be generating the types of results you were after.

An old saying has told us for years that "there is no 'I' in 'team'", meaning that in order to become a successful, respected leader, you have to put aside your own needs and look at yourself as just one part of a larger whole. While this is certainly true, from the perspective of a leader there actually IS a pretty important "I" in team. It's just that most people use it incorrectly.

As a leader, you don't lead by delegating authority or even by simply demanding excellence from those around you. You lead by example. You always have (whether you realize it or not) and you always will. You set the tone for everything that happens. Think about it - if you like to joke around throughout the work day, your team members will probably joke around a bit, too. If you like to keep things a bit more on the serious side, the mood of your team members will reflect that.

This is a clear-cut example of the two-way street of team leadership, and it is one you NEED to know how to use to your advantage. Never, under any circumstances, should you ask something of your employees that you would be unwilling to do yourself. Don't say to your new graphic designer, Timothy, "Hey, we're a bit behind on this upcoming project and I need you to come in on the weekend." Instead, say, "Hey, so that we can get caught up, I'm going to be coming in on the weekend and I would really appreciate it if you could find the time to as well." This goes above and beyond just showing your team members that they're appreciated. It lets them know that you're not JUST the team leader, you're a part of the team as well. Of course, you might not always be able to come in on the weekend yourself, but showing your willingness is more of the idea here.

Pay attention to the way this idea plays out in visual cues, as well. If you want your employees to dress more professionally in the office, don't call them together and reprimand them for their current appearance while you're wearing beach shorts and flip-flops. Doing so will end in slowly chipping away at that high-functioning team you worked so hard to build in the first place. If you show up every day at the office dressed in a suit and tie, just watch how your employees will rise to meet your dress code.

A Team Shares EVERYTHING

This idea also plays out in how you celebrate your accomplishments or lack thereof. By making yourself a more ingrained part of the team and sharing the challenges, it means that you truly get to share in the victories as well. Remember - you don't work in a vacuum. When a project finishes successfully, people may want to give you the credit because "you told the right people to do the right things." You didn't. Never forget that you're just one small part of a larger whole. If you were willing to share the challenges, you have to share the victories as well - this means that any success is the TEAM'S success, not yours.

In the end, the phrase "team leader" is actually something of a misnomer. People tend to think of it as immediately positive - you're in a position of authority and that is something to be celebrated. While this may be true, it's also something that can be far too easily abused - even unintentionally - if you're not careful. If a chain (or team) is only as strong as its weakest link, you need to understand that the weakest link will ALWAYS be the team leader by default. Your number one priority is making sure that the entire team is moving forward through the way you treat your team members, the way you behave, and the way you show them that you're all in this together.
Posted by Mike at 4:17 AM