How Multi-Tasking Can Tank Your Productivity 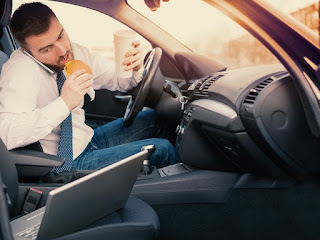 For more than a decade, Dr. Daniel Simons and his colleagues studied a form of invisibility known as inattentional blindness.


In the best-known demonstration, Simons showed a video and asked people to count how many times basketball players in white shirts passed a ball. After 30 seconds, a woman in a gorilla suit sauntered into the scene, faced the camera, thumped her chest and walked away. Half the viewers missed her. In fact, some people looked right at the gorilla and did not see it.


That video was a sensation, so a 2010 sequel again featured the gorilla (as expected). This time, viewers were so focused on watching for the gorilla that they overlooked other unexpected events like the changing background color.


How could they miss something right before their eyes? Inattentional blindness. Humans consciously see only a small subset of our visual world, and when we focus on one thing, we overlook others.


The Statistics on Multi-Tasking


Most people are unaware of the limits of their attention, which can cause dangerous situations (like texting and driving).


What about multi-tasking at work? A majority of people spend time bouncing between calls, e-mails, and creative tasks, believing that this plate-spinning approach makes them more efficient.


Any time you need to pay attention, the prefrontal cortex of your brain begins working. Focusing on a single task means both sides of your prefrontal cortex are working together in harmony, but adding secondary tasks forces the left and right sides of the brain to operate independently. Scientists from the Paris Institut National de la Santé et de la Recherche Médicale (INSERM) found that this "brain split" caused subjects to forget details and to make three times more mistakes.


Another study found that participants who multi-tasked during cognitive tasks experienced an IQ score decline similar to those who have stayed up all night. Some of the multi-tasking men had their IQ drop 15 points, leaving them with the average IQ of an 8-year-old child. That's some jaw-dropping data!


So how can you avoid the multi-tasking "trap?" Here are four suggestions:


When juggling assignments at work, intentionally stop and place lower priority projects out of sight.


Mute notifications from your e-mail or phone, send calls to voicemail, or put a sign on your door saying you will not be available for the next __ minutes. Give full attention to one project at a time and your creativity and efficiency will increase.


Rather than bouncing between tasks, map out chunks of time for each project. Twenty-minute blocks are a great way to schedule your most valuable time slots.


Turn Off Your Phone


Keep your phone off the table during meetings and turned off during peak productivity sessions.


Studies show that the average professional spends about 23 percent of their day in e-mail.


But an Irvine study found when employees were cut off from e-mail for five days, heart tracking monitors revealed a decrease in stress and an increase in mental endurance. Employees who switch screens less often minimize multi-tasking and work more efficiently.


Consider limiting availability with automatic-reply settings like this: "I am not available at this time but will be checking messages again at 2 p.m. For immediate assistance, contact ________."


The next time you're tempted to multi-task, just say NO! You may think you're getting more done, but you're probably wrong.