How to Keep You and Your Team Motivated and On Task Before, During, and After the Holidays 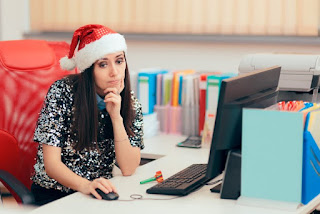 The holiday season is upon us yet again, which can be either a good or a bad thing depending on your perspective.


On the one hand, it's a great opportunity to reconnect with all of those friends, family members, and other loved ones that you may not have had as much time with as you would have liked throughout the year. On the other hand, your attention is constantly being pulled in about a million different directions - which can have bad implications in terms of your business' productivity.


But, in truth, the holidays don't have to kill the momentum you've been steadily building throughout the year. If you really want to keep yourself (and your team members) on task before, during, and after the holidays, there are a few key tips you'll want to keep in mind.


Separate Your Work and Home Lives as Much as Possible


We've written in the past about how important it is to maintain a work/life balance, but it is especially so for you and your team members during the holidays.


As a leader, it is in your best interest to lay down a few hard and fast rules about "work is work, home is home" during the month of December.


Remember that according to one study, almost two-thirds of people say that they get stressed during the holidays due to a perceived lack of time. If people feel compelled to put in long hours in the office and then take work home with them on top of that, you're only going to compound a problem.


Instead, be clear that the holidays are a time for friends and family members and barring a few important projects and deadlines, most things can and absolutely should stay in the office.


Embrace the Opportunity For a Little Down Time


Yes, it's true - you're about to lose a bunch of business days in a row right at the end of the year because of the one-two punch that is Christmas and New Years.


Yes, you'll probably have a lot of days cut short all throughout December due to holiday parties and other gatherings. But the fact of the matter is that this isn't something that you should fear or try to avoid - instead, you should lean into it as much as possible.


Remember that a number of different studies have been conducted over the years that show that when we work a strict 40 hours a week, our productivity actually takes a bit of a dive. People quickly start to feel over-stressed and overwhelmed, which does the exact opposite of what you're trying to accomplish.


Especially during the holiday season, don't overlook an opportunity to let people relax, take a little time off and go home early. At the very least, they'll be primed and ready to go the extra mile when they return.


Never forget that when it comes to productivity during the holiday season, you should always be focused on "quality" and not "quantity."


These are just a few of the key things that you should consider when keeping everyone motivated before, during, and after the holidays. If at any point you still feel stressed, just remember - the season is going to charge on ahead whether you're ready for it or not. Soon it will be January and you'll be ready to take 2019 by storm... until next December, that is.