A Leadership Ethics Lesson Courtesy of a Leeson 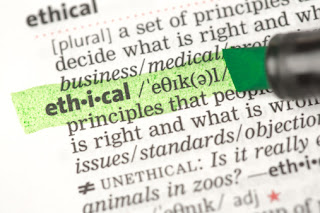 Although ethical behavior in business is often touted, it can be hard to attain in practice. That's because ethical behavior has to be practiced by every individual, every day. It's not the sort of thing that can be decided upon and implemented en masse. Leaders are often under particular pressure to be practical over ethical. The reasoning is often because hard decisions require frequent compromise, and ethics often come across as black-and-white perspectives that don't match the reality facing a decision-maker.

A Virtue You Can't Afford to Ignore

However, ignoring ethics can be a dangerous path. Nick Leeson provides a very vivid example of this. His name is well known in financial circles as the man who single-handedly put the Singapore financial markets into a panic and brought down one of Britain's most famous banks.

Leeson got his start early in banking as a clerk in 1985. At first, Leeson seemed to be a success. However, he began quickly playing outside the rules, and because he was bringing in big profits, Barings Bank ignored the risks.

By 1992, trades started going bad. Leeson packed the losses into a technical account originally designed as a dummy account for accounting errors. No one noticed, so he continued on his unethical path of hiding losses repeatedly. The tipping point came in January 1995 when Leeson placed a big trade between the Singapore and Japanese markets. Not expecting a major earthquake in Japan to throw both markets into a tailspin, Leeson realized the gig was up and went into hiding. Barings Bank folded a few weeks later owing ?827 million in losses, and eventually, Leeson went to prison.

Interestingly, following good ethics not only avoids situations like Leeson's, but it also works as a defense for a business leader. The adage, "actions speak louder than words" is true for ethics as well. Ethical behavior not only keeps employees behaving on the right side of the law, but it also gives managers and leaders incentive to work for more than just the bottom line. Ethics can incorporate greater goodwill for the community a business operates in, safety protection of employees and customers, market protection from unscrupulous players, and far better interaction with the government and regulators. All of which, in turn, help a company see a larger bottom line.

No question, the ethical path isn't always the easiest. However, leaders of companies and organizations need to remember that good ethics involve more than just an individual perspective; by the very nature of their role, top managers affect all of the organization and set an example for staff to follow and the community to model after. Good ethics can be far more than just a set of rules; it can be a powerful marketing/communication tool positively setting a business apart in the market from competitors and creating the long-term foundation for customer retention.