What Relay Teams Can Teach Us About Teamwork 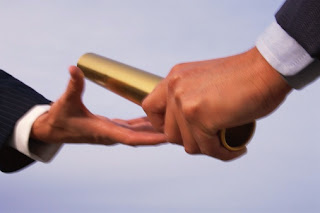 Few people exemplify skill and teamwork better than a well-coached relay team. Whether at the Olympic Games or a high school track meet, the relays are often one of the most exciting events.

Relay teams typically consist of four of the most highly skilled runners at a particular distance. But skill alone isn't enough. The teams must practice together to get their timing and execution just right. It takes a great deal of teamwork to win a relay event.

In a relay race, runners must pass the baton from one to the next within a predefined zone. If they fail to make the handoff within that zone, they are disqualified. At the same time, the runner receiving the baton cannot start their leg of the race from a complete stop. The amount of time they'd lose would be astronomical. That means the runner handing off the baton and the runner receiving the baton must time their running perfectly so that the second runner can pick up speed while still receiving the baton within the zone. This requires a level of precision that can only be developed with practice and considerable communication. When a team masters this aspect of running a relay and combines it with phenomenal skill, they can accomplishes incredible things.

How running a relay relates to running a business

Like running a relay race, running a successful business requires more than just having talented people. You could hire people who are absolutely genius in their respective roles, but if they can't communicate well together, they won't accomplish much.

Building a successful team in a professional environment requires finding employees who can accomplish their jobs effectively, but also fit together as a group. When a relay team is working together, they understand how their roles fit together to form a cohesive unit. The same is true of your organization. Everyone on your team must be clear about their individual role and how it relates to the end goals of the organization.

As with a relay team, the handoff is critical in business, too. Every member of the team has their own job to do, and handoffs dictate how well potential leads and prospects are passed from one department or team to the next. When these handoffs are handled well, leads are moved seamlessly down the sales funnel, and relationships develop and grow.

The perfect handoff occurs when the members of the team know how to communicate with one another. They understand each other's respective roles and strengths and know how to work together for the betterment of the team. For example, in a team with weak communication, the marketing department might hand off a lead to the sales team before that lead is ready to move along. However, when the two departments communicate and understand each other better, they improve their handoff skills, boosting the odds of conversion and success.

Track and field can be a source of entertainment, but also inspiration. The next time you see the sport, watch carefully how well the relay team fits together. Use some of their insight when planning your hires and organizing your business.
Posted by Mike at 7:24 AM