Healthy Employees Are Productive Employees: Why to Incentivize Health at Work 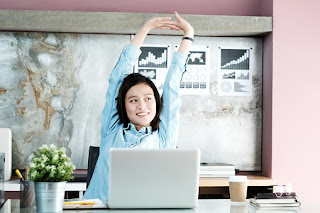 Productivity really is the secret to everything in terms of your business' success. Happier employees tend to be more productive, which is why it is essential that you focus on things like corporate culture and team-building exercises whenever the opportunity arises.

Many people don't realize, however, that this is only one small part of a much larger story. It isn't enough for your employees to be happy - healthy employees are also significantly more productive than those who are not, which is why if you're not already making health and wellness top priorities within your organization now would be an excellent time to start.

According to a series of studies that were recently conducted on the subject, healthy employees may be a whole lot more valuable than you've even realized:

At this point, the answer to the question "how important are healthy employees?" becomes resoundingly clear: very, very important. But saying that you value your employee's health is one thing. Actually taking steps to show that this is true is something else entirely.

How to Value Health at Work

Luckily, valuing healthy employees is simply a matter of a series of small choices. You can begin by making sure that healthy snacks are available for employees in the office who may be "burning the midnight oil," for example. If you're one of the many workplaces around the country that has a vending machine on-site, consider restocking that vending machine with healthy snacks like fruits and vegetables instead of the traditional potato chips and sweets. People will absolutely start to eat them, especially if they don't really have an alternative.

You'll also want to consider emphasizing health in terms of things like employee benefits packages. Consider throwing in a free gym membership to a local fitness club that employees can take advantage of after they've worked with your organization for X number of weeks or months. It may not be something that everyone uses, but those who do will benefit greatly. You'll also benefit, too, as this is a clear sign that you actually care about the health and fitness of your employees - something that will make it easier to attract top talent in the future.

Also remember that according to one report by Quantum Workplace, employees tend to be 14% more engaged when they are provided some time off to "recharge their batteries," so to speak. So the next time you think it's a good idea to make people work incredibly long hours week after week, you may want to think again.