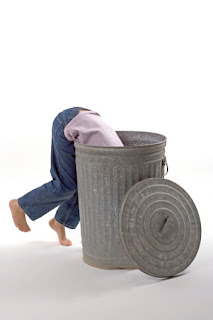 Matt Malone would probably be considered an odd fellow and maybe even mentally ill by those seeing him on the street. However, for those who know Malone personally, they might think that he's a genius.

Malone is, in modern terms, known as a dumpster diver. That involves essentially going into large dumpster bins and rummaging around to see what people have thrown away.

Malone was first introduced to the practice by accident when working in a company that got rid of far too much valuable, working equipment. What he realized at first was that the items were still usable, valuable, and most importantly, functional. However, when he took them home and started making inventions with the items, he realized something more - people wanted what he was finding and were willing to pay real cash for the items.

Diamonds in the Rough

Today, Malone is at an expert level, finding gems in the rough and converting them into sales of hundreds and even thousands of dollars. In fact, he makes more in dumpster-related sales than he does in his regular job.

However, this article is not about Malone's success. It's about the fact that Malone's earnings are possible because businesses regularly throw away thousands of dollars of perfectly fine commodities and equipment simply because it's not needed, no longer perfect, or no one knows what to do with it in the office. As a result, companies small and large are bleeding expenses daily without seeing the full benefit from what was bought. And that makes Malone a rich man.

Whether it's security cameras, unused ink toner, or usable furniture, companies move out perfectly viable goods and products to their collective dumpsters every day. And this obvious waste and loss of company money is because there is no incentive within most companies to try to make things stretch further. Don't need that toner anymore? No problem, buy a new one and throw the old one in the box in the hallway. The janitor will take care of it regardless of the fact we spent $300 to buy it on the last office supply order.

People regularly make fun of the TSA and government airport security, but the security agency has one step up on some of the smartest companies. Instead of adding more trash to landfills with all the nail clippers, pocket knives and nail files they confiscate from travelers at the security gates, they bundle them into large bins and sell them on eBay, recouping actual cash from free confiscations. How many companies actively recoup funds by reselling what they don't need? Not enough, which is why Malone and dumpster divers like him are becoming rich people.

Many parts of the world look at the U.S. and see it as synonymous with waste and laziness. But it doesn't have to be this way. A simple bit of attention on equipment and inventory can change behavior dramatically in every office and program.

General Motors got smart and now saves a $1 billion a year. By simply making it clear not to waste and to proactively consolidate extra material for reuse or resale, companies can add a small, but valuable additional revenue stream to their bottom line. That may be bad news for Mr. Malone, but he's likely not too worried. So many businesses are throwing away so much product daily, he's unlikely to run out of free trash discoveries and supply for a long time.