Getting Out of Your Own Way 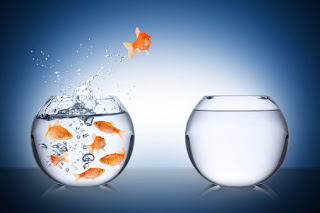 Brilliant author, philosopher, and speaker Alan Watts once published his autobiographical book, In My Own Way, the title of which is a play on words with alternate meanings. An extremely independent thinker, Watts clearly did things in his own inimitable way. The clever alternate meaning is probably more common for the rest of us, where we use excuses and other convenient reasons to get "in our own way" on the path toward success. As Watts pointed out, the difference lies between fulfilling yourself and obstructing yourself.

Starting a business is a bold step, not one for the timid. The list of excuses used to avoid the dangers of launching a business are many and varied, but they all resonate with the same timidity. Fear of failure is probably the most common thread among all of the excuses holding us back. It takes courage to take the plunge, and a prospective entrepreneur must be willing to take some chances or they will definitely getting in their own way.

You are familiar with these. We have heard them all before: I don't know enough about running a business. I don't have the skills. I don't have sufficient contacts with the right people to get started on the right foot. I can't afford it right now. The economy won't support a new business just yet. It's just not the right time.

There are many ways to overcome the fear of failure. One of the most common is simply out of necessity. People lose their long-held jobs and have to pay the rent. Being "forced" into business has been the best thing ever to happen to a lot of people. But whether you are forced, following your dream, or simply fall into it by chance, the opportunities are there for you to succeed. Pat Flynn's success is a good example.

Pat Flynn was laid off by an architectural firm in 2008. He set a goal of passing an architecture-related exam and created a website to gather information on the test and how to pass it. Many others were also interested in this objective and the site started generating thousands of hits daily. His internal light bulb went on and Flynn wrote an ebook study guide on how to pass that test, selling it for $19.99. Within a month, he had generated sales in excess of $7,000. He never looked back, and today is the brain trust behind SmartPassiveIncome.com, as well as numerous other revenue-generating websites. Pat Flynn got out of his own way.

Founder of Facebook Mark Zuckerberg is an extremely successful entrepreneur. He didnâ€™t start the wave that has become social media, but his brainchild is today clearly the most popular vehicle in the genre. On his profound success, Zuckerberg said, â€œThe biggest risk is not taking any riskâ€¦ In a world thatâ€™s changing really quickly, the only strategy that is guaranteed to fail is not taking risks.â€

You must get past that little voice in your head that says, "You can't," and find the other one in there that says, "Yes, you can." That voice is in there. You just have to find it and listen, for a change. The boldness to take the plunge depends on it. As Henry Ford once said, "Whether you think you can, or you think you can't, you're right."
Posted by Mike at 4:35 AM